Anyone who considers arithmetical methods of producing random digits is, of course, in a state of sin. -- John von Neumann
God does not play dice -- Albert Einstein

This is the home page for the kinetic Monte Carlo code SPPARKS, an acronym for Stochastic Parallel PARticle Kinetic Simulator.

SPPARKS is a parallel Monte Carlo code for on-lattice and off-lattice models that includes algorithms for kinetic Monte Carlo (KMC), rejection kinetic Monte Carlo (rKMC), and Metropolis Monte Carlo (MMC). It implements several KMC solvers whose serial computational complexity ranges from O(N) to O(NlogN) to O(1) in the number of events N owned by a processor. In a generic sense the solvers catalog a list of "events", each with an associated probability, choose a single event to perform, and advance time by the correct amount. Events may be chosen individually at random, or by sweeping over sites in a more ordered fashion.

Applications that are packaged with SPPARKS, or which a user adds to the code, define sites and events and probabilities, as well as how the execution of an event changes the state of the model.

SPPARKS runs on single processors or in parallel using message-passing techniques and a spatial-decomposition of the simulation domain. The code is designed to be easy to modify or extend with new functionality.

SPPARKS was developed at Sandia National Laboratories, a US Department of Energy laboratory. The authors are Steve Plimpton and Aidan Thompson and Alex Slepoy who can be contacted at sjplimp at sandia.gov, athomps at sandia.gov, and alexander.slepoy at nnsa.doe.gov, respectively. Funding for SPPARKS development has come from the DOE and is acknowledged here, along with the contributions of others.

The images and movies show typical results for a 300x300x300 lattice, run for a million Monte Carlo steps (sweep over all lattice sites), with 5 volume percent pinning particles, inserted when the average grain radius was 10 sites. In the normal case, the system becomes fully pinned. In the second case, abnormal growth eventually occurs. 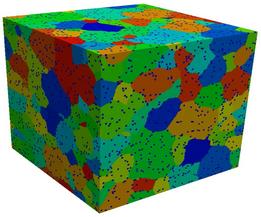 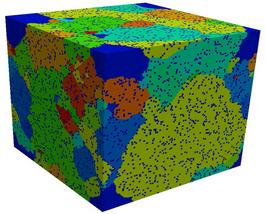