Normally, a parallel code will fall off from 100% efficiency as a problem is run on more processors. In this case, the parallel efficiency actually increases modestly across a wide range of processor counts. This is because a tree-based event selection routine is being used in the KMC solver. It's cost scales as log(N) in the number of events N to select from, at each step. Since the number of sites per processor shrinks as processors are added, and N is proportional to the number of sites per processor, the cost of event selection decreases as processor count increases. 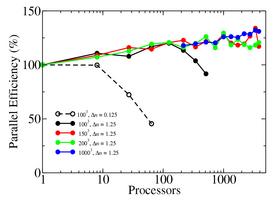 The smallest problem (1 million lattice sites) was run in two different modes, with DeltaN = 0.125 and 1.25. DeltaN is the nstop parameter in the sector command and determines how long the KMC algorithm performs selection in one octant of a processor's sub-domain before communicating and moving to the next octant. Thus runs with a small DeltaN perform more communication and are less parallel efficient as processor count increases.

This benchmark and the various KMC solver options in SPPARKS are discussed in more detail in the technical report listed on the publications page.